As speakers for the DIY cutterhead tweeters are said to be a better option than full range loudspeakers, because the inverted RIAA curve attenuates low frequencies which makes a speaker for them not really neccessary.
Pollin had some Hochton-Lautsprecher OT-57-148 from which I ordered two because of the pricetag.
These tweeters are with their 53mm diameters a lot smaller than the ones I used before, so I build a whole new cutterhead for them.

For simplicity reasons again made out of wood (plywood). The parts were cnc milled, but they are not that special that it would have been neccessary. 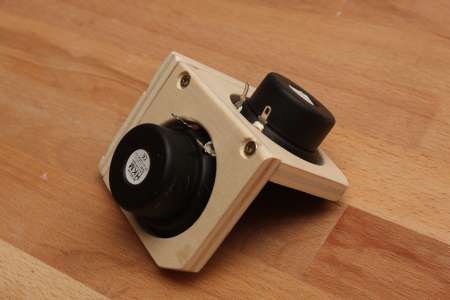 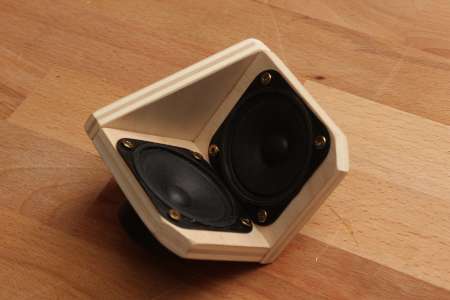 The transmission of the movement from the tweeters is done by 1mm brass rods which are glued to the speaker cones by two component epoxy. Again, the needle is attached by a bare piece of terminal strip. Both rods are soldered to the terminal strip. This makes it possible to move them later on by desoldering them. 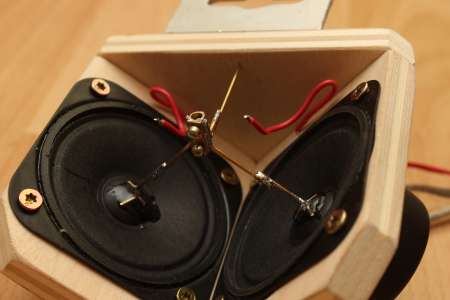 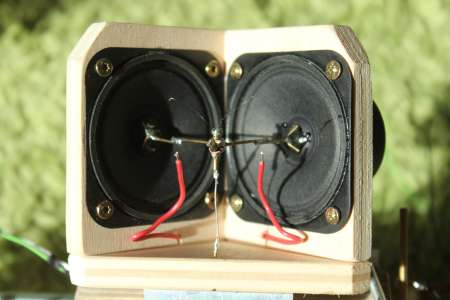 
The needles I used since the beginning were just some random sewing needles ground by hand. Ideally the cutting needle should be sharper than the on used on the turntable for playing, such that the playback needle rides on the "walls" of the grooves and doesnt slide around in the "valleys" (example in the following sketch).
Left: The needle is guided by the walls of the groove. Right: The cutting needle is too dull, which causes the playback needle to slide around.

To sharpen a piece of steelrod I've built a disc sander out of an hard disk with a needle sharpening device.
Here a photo of the result. The rod on the left has a diameter of 1.5mm (sewing needle). After a few seconds of wet-sanding the tip is at least as sharp as my Ortofon playback needle (which should have something around 25µm at its tip). I ground the needle to 60°, no idea if this is the best choice. 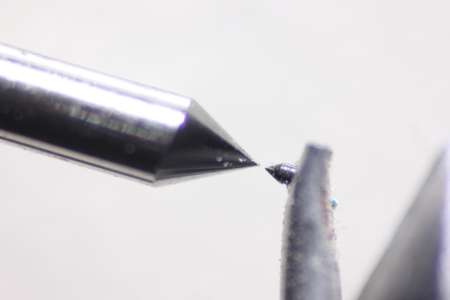 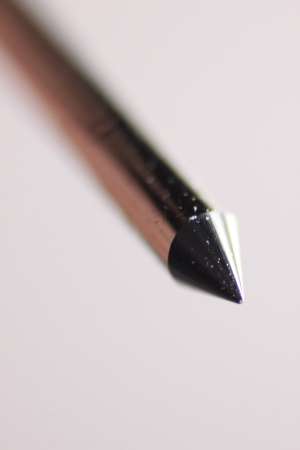 I was curious to hear what the new needle sounded like and if it made an improvement.
To help the needle moving away the polycarbonat of the cd surface I heated it up with a hair dryer. I took the Presto cutterheads as an example and leaned the needle around 65° backwards.
Inconveniently I had move the needle further out of the cutterhead, because the cutterhead would collide otherwise with the centering pin of the turntable. This definitely needs changing! 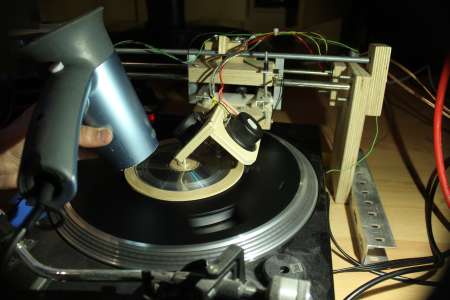 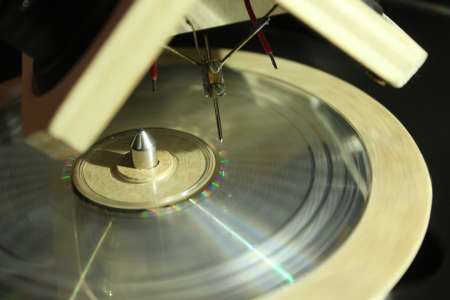 I also had to reduce the cutting weight down to 43 gramms to get rid of the squeaking noise. 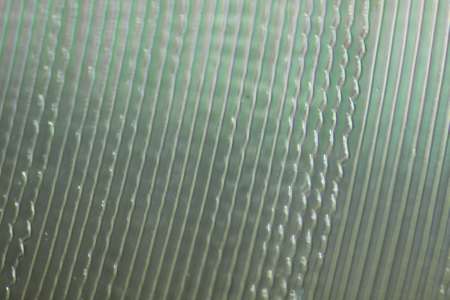 45 RPM, 8 mm/min feedrate, and the song "Grapes - I Dunno" fed through Audacity with a highpass filter at150 Hz, lowpass at 15 kHz and inverted RIAA.

Admittedly I had anticipated a bit more of these changes, but theres still a lot more to do.


Moving on to Cutterhead V3