Vinyl records have (in my opinion) a more detailed, warmer sound and playing them is a different feeling than "cold" digital music.
With this view of things I'm not alone, thats why vinyl is by far not dead and still produced.
A great thing would be to be able to cut your own records. Besides commercial solutions like Vinylrecorder or Vinylium for home usage it is possible to make the so called dubplates with some hand crafting.
My goal is not to produce high quality records but rather to experiment and understand the rather old technic that goes into making these.

How a vinyl records works is something I'm not going to explain here. The following links helped me quite well in the beginning:
After I understood the theory good enough I started to collect parts for a prototype.

From an old pair of PC speakers I salvaged two 5W full range speaker (diameter ca. 70mm, a bit too large). These were assembled at 90° in some sort of wooden box. 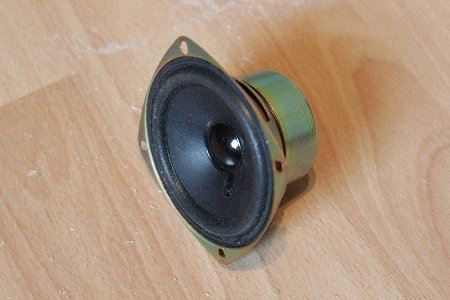 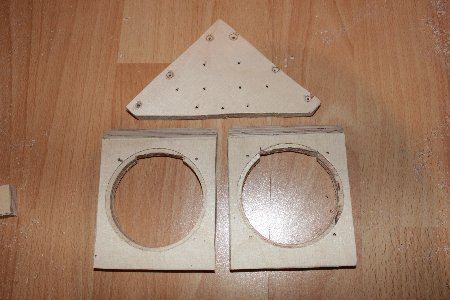 By the 45° angle of each speaker it is theoretically possible to cut in stereo. 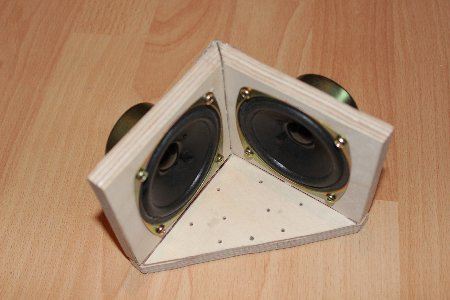 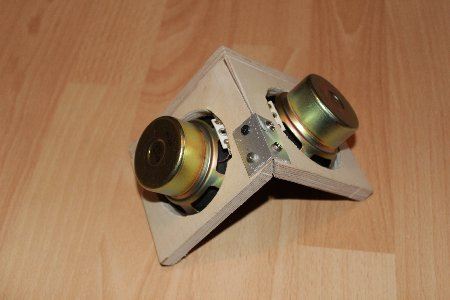 The loudspeaker are going to move a needle. Therefore I formed a cone out of some plastic sheet I found in the trashbin and glued a short piece of wire to its tip.
Both wires lead to a bare terminal strip piece in which a needle can be put in. 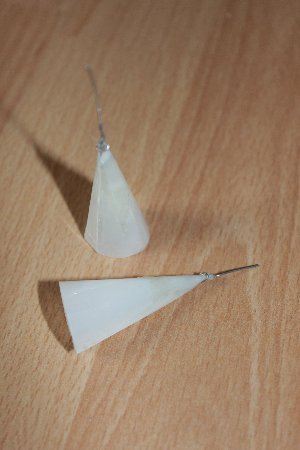 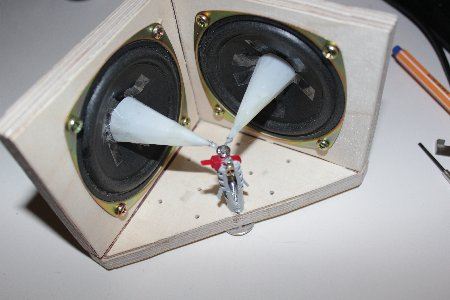 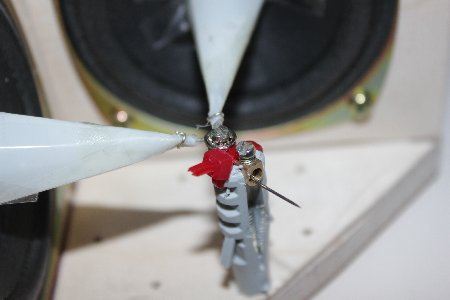 Later I replaces the wall plug by a thread. It was necessary to keep the needle from bending in the forward direction and also not to stress the speakers too much.
I used a thread because the moving mass which needs to be accelerated by the speakers should be as low as possible. 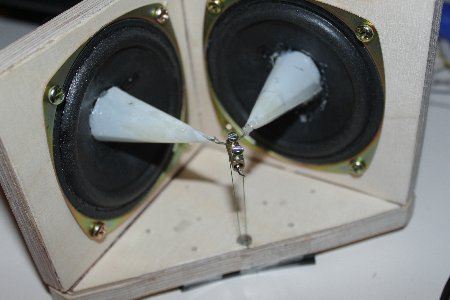 Now the cutterhead only needs to be moved from the outside to the inside as precise as possible.
For this I screwed the cutterhead to a long piece of wood and attached a counterweight to the other end. A small groove in the wood enables it to ride along a steel rod (probably salvaged out of an old scanner or printer).
The advancing of the cutterhead is done by a wooden block and a M8 threaded rod which pushes the whole thing along. 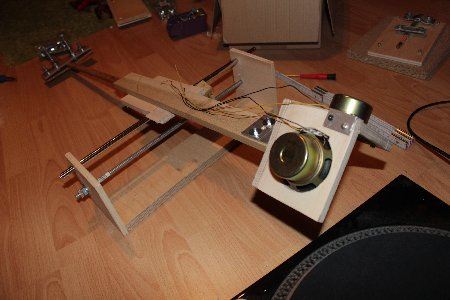 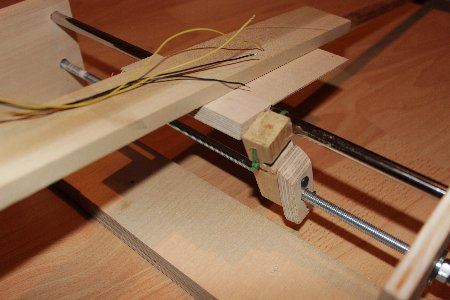 The threaded rod gets rotated by a small stepper motor with gearbox (also probably out of an old scanner or printer).
The feedrate lays somewhere between 3 and 10 mm/min, depending on cutting depth, volume and speed. 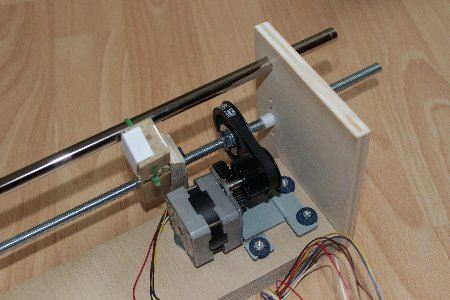 As cutting material (at least for the first tries) CD's / DVD's are not a bad choice. The price (especially with old advertisement CD's) is a good reason and some good results were achieved.
The CD gets put on this round cnc routed platter and taped down on the sides. A small wooden ring centers the CD. 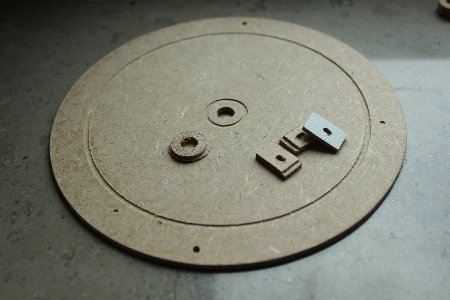 The assembly:
The turntable is a Reloop RP-4000 MK3, older record players are often too weak (except the Technics 1210) to keep a constant speed even with the cutting needle lying on it.
The stepper motor is connected to my CNC-Controllerbox and is controlled via LinuxCNC by means of a clock signal (for the first tries I used a linear feedrate, not the Rheinsche Füllschriftverfahren (someone knows the translation?).
To adjust the counterweight I place a small kitchen scale under the cutting head and carefully put the needle down on it. The counterweight is adjusted until the intended weight is acheived. The weight depends on quite a few things, between 50 and 300 gramms it a good place to start testing. 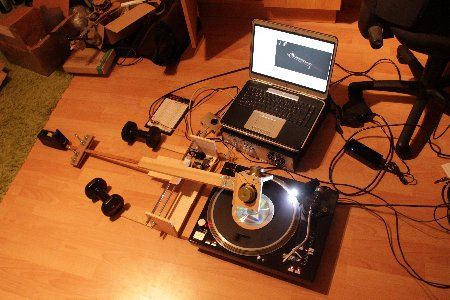 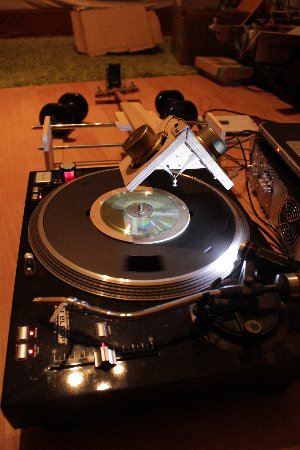 The needle:
As a cost effective alternative I am using a sewing needle which is ground in advance. In this case the needle is bent backwards by ca. 45° since I'm not cutting, which would mean removing material from the CD surface, but rather moving material to the side, which is called "embossing".
The following sketch should explain it a bit better: 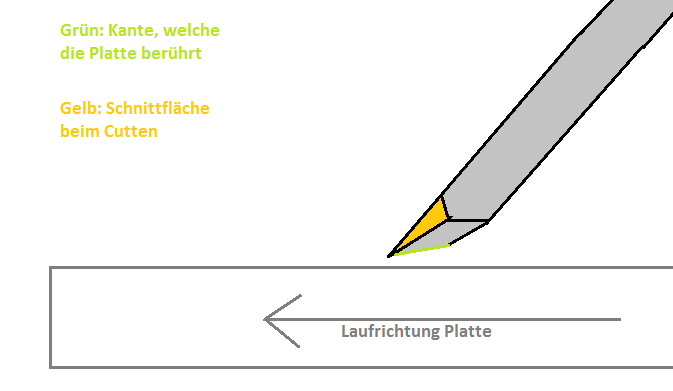 In the course of this project I want to try different, harder materials as a cutting/embossing needle.
For the first cuts (I call them cuts, but they should be called embossings) I used a feedrate of 10mm/min. The cutting weight was set to 70 gramms, which was enough to keep the playback needle in the groove. 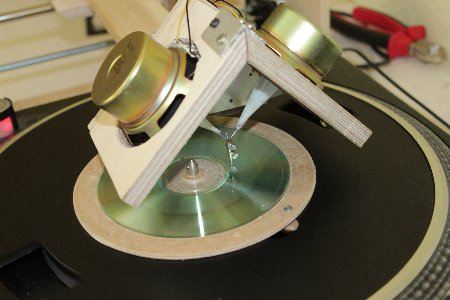 Here is one of the first results. The quality gets better from try to try but theres still a lot more to improve on. But this is the most fun I guess. 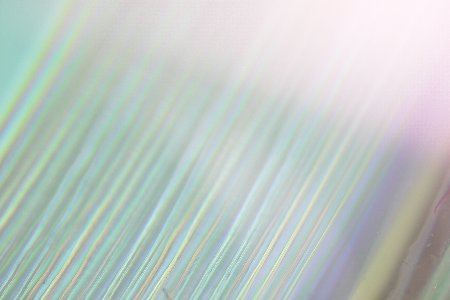 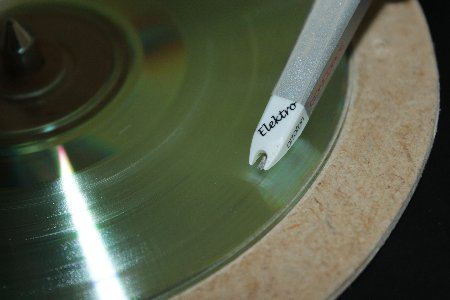 To improve the quality a bit more I removed the membrane from the speakers. This helps because the moving mass of the speakers is reduced and the energy is used more effectively. Also it is not that loud anymore during "cutting". 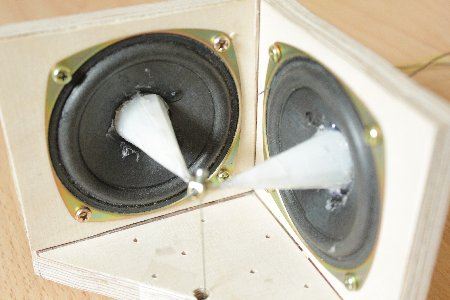 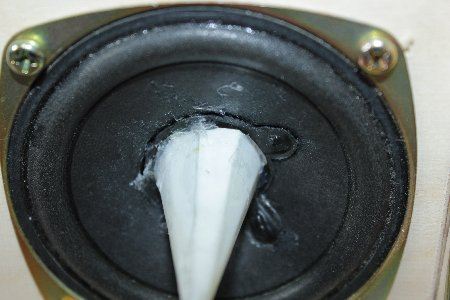 The membrane was quickly removed by the use of an xacto knife. 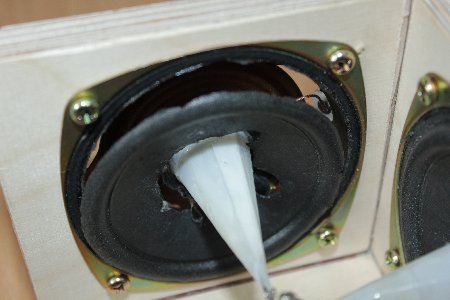 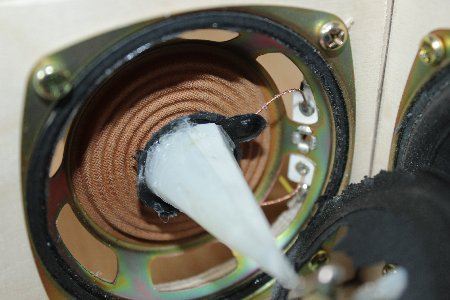 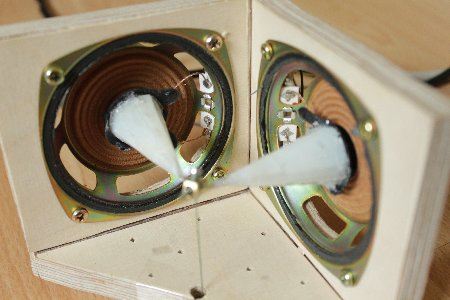 Without the membrane the coils in the speaker are much more easy to move but also can touch the magnets if to much pressure is applied. A piece of wire insulation between the terminal block and the case should help keeping the weight off of the speakers. 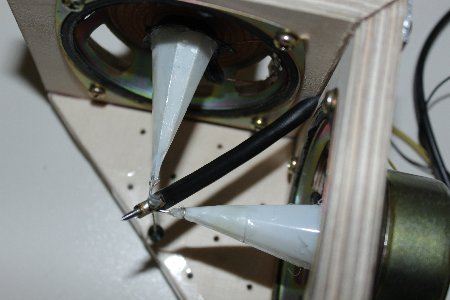 Finally something to hear: The volume is still too low, the noise too loud, the high frequencies too weak. But I'm optimistic ...
The weight, which is pressing the needle on the material was ca. 130 gramms. The Frequencies were limited to around 200Hz to 8kHz. Rotational speed: 45RPM. Linear feedrate of 10 mm/min. On the 13.3. the membrane was still attached.

The first that needs improving is the whole cutterhead movement assembly.
Lets move along with the rebuild of the mechanics